Success League: Here’s Who Won at the 2017 National Business Awards

Where are you most likely to find the winners of this year’s National Business Awards — known as the ‘Oscars of South African business’ — a year from now? Well, dominating the 2% of South Africa’s economy that is forecast to grow in 2018.

Data analysis from the last 15 years of these awards points to both finalists and winners recording sustained growth in the months and years following their accolades; particularly the mid-size organisations. The large corporates, including Woolworths Holdings Limited, Discovery, Coca-Cola SA and Old Mutual this year, utilise the awards more to enhance recognition of their strides in a particular area, like sustainability.

The winners’ own strategic and operational prowess aside, some of this growth has to do with the awards themselves. Indeed, a number of independent studies have compared the financial performance of award-winning companies against similar peers in their sectors. In one study, 120 award winners were tracked for 11 years. They showed improved financial performance a year after winning. After three years, their sales had risen by 17% — and share value by a staggering 36%. After a decade, these companies were still growing sales nearly 80% more than their peers. This phenomenon in mind, Thursday’s awards — held at Emperors Palace — were as much a celebration of the sustained success likely to follow for those recognised as they were a recognition of achievements past.

So who took top billing on Thursday night? Before the evening’s climax, in which business icon Sol Kerzner was honoured as the year’s Lifetime Achiever, 15 winners had their time in the sun: Woolworths Holdings Limited outpaced six co-finalists to take the Corporate Citizenship Trophy, in the same year that it marks a decade of its Good Business Journey. Microsoft SA hit all the right buttons with judges to win the Customer Focus Award and Belgotex floored them with its array of eco-friendly measures (read more here) to scoop the Sustainability Award from heavyweights Coca-Cola and Hyundai.

In tune with 2017’s most trending topic, #digitaldisruption, two new award categories were added to the slate this year. The first, Innovation through Technology, went to LexisNexis® South Africa, with multinational AECOM being honoured as the Highly Commended runner-up. The second new tech-focused trophy, Digital Company of the Year, went to Liquorice — one of Africa’s leading digital marketing concerns. 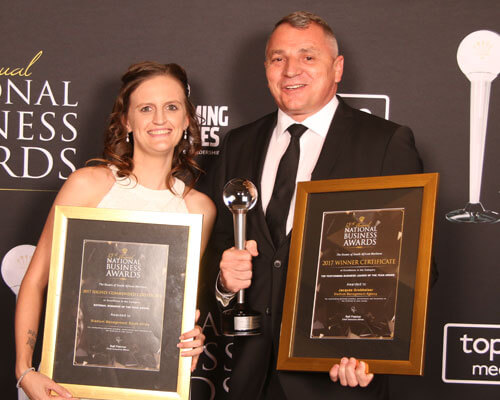 For a decade and a half, South Africa’s National Business Awards has recognised outstanding achievements by private and public sector organisations across a host of focus areas: sustainability, customer focus, tech innovation, infrastructure development and more. Top Media and Communications founder, and then-CEO, Richard Fletcher launched the awards in 2002 — yet they began life on the page, rather than the stage, with Top Media and Communications researching the performance of some 10 000 South African companies. Of those, roughly 2 500 qualified to list in the first edition of annual prestige-format Top Performing Companies publication; based on methodology developed in collaboration with Morné Oosthuizen at UCT’s Development Policy Research Unit.

Top Media and Communications then launched the awards to showcase the very best of its published companies, along with SA’s most accomplished individual business leaders. At the time, Fletcher drew upon the Graduate School of Business to help engineer stringent awards qualification criteria, for both its top performing companies and other external entrants. All qualified finalists were then assessed by an independent panel of judges: industry experts, CEOs, academics and association partners.

This pioneering recognition model has since been repeated and refined over the past fifteen years of the National Business Awards, and has also been applied to Top Media and Communications’ other recognition platforms — Top 500, for example. In the same space of time, South Africa has seen a host of similar awards ventures being launched, to mixed success. However, few have matched the fifteen years of prestige built up by the National Business Awards.

Top Media and Communications CEO Ralf Fletcher, who gave the welcome address, commended the calibre of this year’s finalists saying, “in my 20 years of immersion in the science of best business performance, I have seldom seen such a powerhouse armada of new tech innovators, job creators and economy drivers, all together on the same roster.”

The independent panel of judges, comprising several industry heavyweights, also emphasised the high number of quality of entries received this year. Potential adverse factors aside like slow global growth, the potential ripples of December’s ruling party elective conference, jittery Zimbabwe, it would appear that South Africa’s economic growth prospects for 2018 are in good hands.
Top Media and Communications would like to thank the National Business Awards judges, honourable speakers, category sponsors, lifestyle sponsors, media partners and VIP & corporate guests. Most of all, thank you to the awards’ 100+ esteemed finalists for sharing their inspiring journeys of success with South Africa.

This article originally appeared on medium.com