Spectator attendances are influenced by the sheer amount of football available, team performance, log standings, TV coverage (broadcasters are competing hard to capture and lock-in 13,0 million soccer viewers with cheap licensing, sign-up and decoder packages), social media, spectator socioeconomic factors (with half of soccer spectators falling within the LSM 9-10 group), the economy (with the Consumer Price Index at 5.5% and the Unemployment rate at 27,1%) and competing alternative events. Small matches are attended by groups of friends and family spending R185 per person per small match, normally groups of seven people, R1,295 per group. Mega matches and its groups of five people spent R2,785 per match. Of the 13 million soccer viewers the average SABC viewer (46% female and 54% male) earns R5,645 per month and the average SuperSport viewer (38% female and 62% male) earns R16,165 per month. Of 13 million soccer viewers 35% or 4,5 million is in Gauteng.

Professional soccer is represented in all 9 of the South African provinces; and supported per capita as follows:

As a result of poor attendances Grant Thornton issued a report in 2014 under contract with the PSL in respect of the Economic Impact Assessment of Professional Soccer in South Africa.

The LSM 5-6 group accounts for the most participants in soccer at 40%.

The LSM 1-4 follows at 31% of the soccer participant population. Half of soccer spectators fall within the LSM 9-10 group. LSM 1-4 accounts for only 3% of soccer followers. (Source: BMi Adult SportTrack 2013).

Soccer has the highest spectatorship (13,0 million) compared to other sports in the country which accounts for soccer followers in the categories of venue spectators, television spectators, radio listeners and newspaper readers.

Spectators attending mega and large matches spend, on average, R557 per person per day (PPPD) over 80% of these spectators spend money on a match ticket, food and beverages as well as on transport.

The description of the average spectator;

Male, aged 25-34, a highly passionate soccer fan who attends soccer matches with friends in groups of 5 people, uses a taxi or private car lives in the province of the team he supports, but is willing to travel around South Africa to watch a mega match. He spends R557 to attend a soccer match. Of this amount:

Male, aged 18-34, a soccer spectator who is keen on soccer, supports one of the mega or medium-sized clubs, attends soccer matches with friends in a group of 2 to 3 people, uses a taxi or walks to get to the stadium, lives within the province, and willing to travel anywhere in the province to watch a medium match and If traveling outside his home province for a soccer match he will typically visit and stay with friends and family. He spends R277 towards the soccer match per day. Of this amount:

Male or female, aged 35-44, a soccer spectator who is hugely passionate about soccer and supports one of the mega, medium, or small-sized clubs, attends soccer matches with friends and family, travels to soccer matches in a group of 7 people, uses a taxi, private car, or walks to get to the stadium and Lives within the local area, he or she spends R277 towards the soccer match per day. Of this amount:

TV Live & Secondary TV coverage (August 2014-May 2015) 33 hrs of Live TV coverage across 3 channels, SABC 1, SuperSport 4/ 4HD and SuperSport Select. 1,14 million was the combined average audience across all Live coverage of Kaizer Chiefs home games across the SABC and SuperSport channels. 4,23 million was the highest combined average audience across all Home games. This was during the Soweto Derby, 7 March 2015.1:03:22 was the average time spent watching among SABC 1 viewers. This is 49% higher compared to SuperSport viewers. 11,18 m is the total unique TV audience. 13, 41 m is the total unique TV audience (Source: TAMS (august 2014-May 2015, All 4+).

Attendances at the FNB Stadium records:

The top watched and attended matches are: 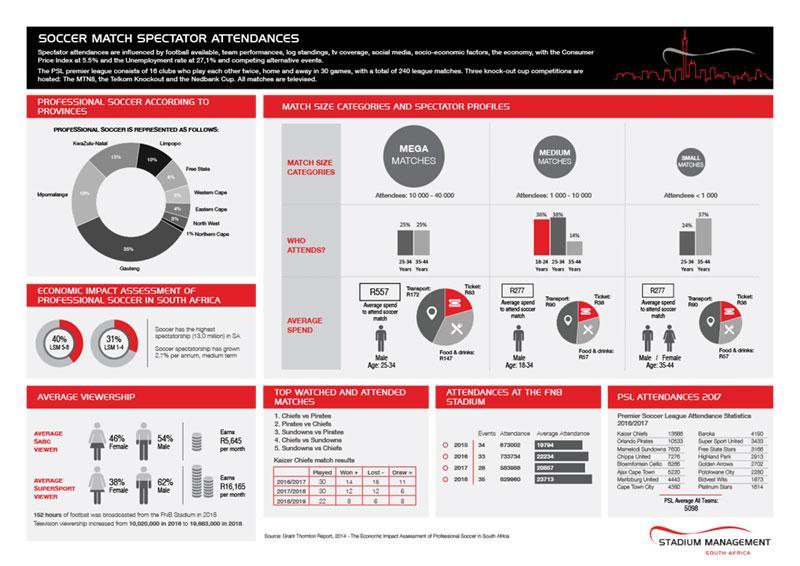